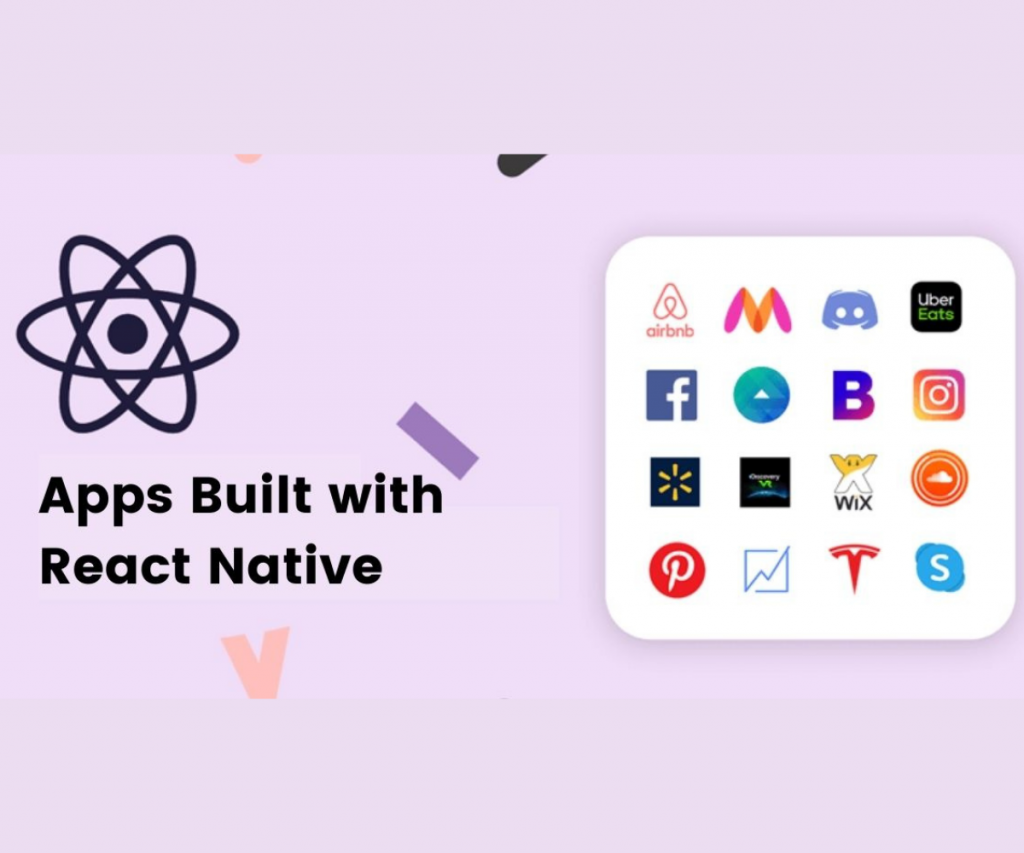 React Native was officially launched in the year 2015 by Facebook. It allows developers to create apps on multiple-platforms using a single code.

Earlier, React Native was useful for creating an MVP version of the applications.

Currently, it has become one of the go-to languages of businesses, startups, and developers to create native apps on Android and iOS platforms.

React Native is basically a native version of the well-known library of the same name, and its primary aim is to introduce the power of React to mobile app development.

For businesses, startups, and enterprises, React Native does the work of merging development teams, enhancing their development speed, and reducing costs.

Besides this, there are various reasons why use React Native for mobile app development.

In this blog, we will walk you through the 7 best apps that are built using React Native.

Facebook is one of the leading social media platforms worldwide that allows users to connect with friends and share multimedia posts.

React Native initiated Facebook’s hackathon project in return for the company’s requirements. The core purpose of Facebook was to provide the main benefits of web development like quick interactions, and a single team to create the entire app.

Read More – Native Vs Hybrid App Development: Which is Best for Your Business

Hence, React Native came into existence and is useful in mobile app development for Android and iOS platforms.

React Native enhanced the performance of the app and also improved the speed of the Events dashboard startup. Moreover, it allows users to provide a top-notch experience.

Instagram was ready to incorporate React Native into their already running mobile application.

They initiated the process with the easiest view known as the Push Notifications view that was initially executed as the WebView. It didn’t need to develop a navigation structure, the reason being UI was easy.

The development team at Instagram had to deal with various issues; but eventually, they increased the development speed. Moreover, they shared 85-99% of code among the Android and iOS apps.

Also, the team released the app way faster as compared to a native solution. Lastly, the team is now able to maintain code effectively.

Bloomberg is famous for offering business and finance news to users worldwide. They fetch data in real-time to make sure that their users remain updated with real-time scenarios in the market.

Initially, Bloomberg has spent a lot of time developing an app for Android and iOS platforms separately.

Later, the engineering team at Bloomberg decided to switch their app to React Native. Why? The reason being they want to provide a better experience to users on Android & iOS.

The latest Bloomberg app offers a streamlined, responsive experience with quick access to videos and other tailor-made content to users.

Skype is a well-known telecommunication network across the globe that allows users to connect with friends & family online via voice, video calls, and chat.

In early 2017, Skype declared that they are working on a revamped app, entirely written in React Native. All the Skype users lightened up with this news as they were facing many bugs in the Skype app.

Discord is basically a free voice call and chat app for gamers. It allows various great features like chatting with the team, checking availability status, carrying out conversations, etc.

Moreover, there are various voice channels on Discord that one can join anytime and start a conversation with various people in that channel.

By adopting React Native, the discord app for Android and iOS platforms share 98% of the code.

UberEats is a leading food delivery services application built by Uber. The app enables users to order food from their favorite restaurant, make payments via wallets, and track the order.

Earlier, UberEats developed a web application to provide the same interface on all the devices. However, the web application wasn’t offering suitable information to the users.

Then, the engineering team at UberEats decided to switch over to React Native, and it was quite simple for them because they have hands-on experience with React Native.

Now, the latest UberEats app offers an attractive UI along with an enhanced UX. Moreover, it introduced sound and push notifications in the app’s dashboard.

Walmart is one of the multinational retail corporations that run different discount department stores, grocery stores, and hypermarkets.

Walmart’s ultimate purpose is to become a leading online retailer worldwide. Hence, they integrated Node.js into their mobile app.

However, they further wanted to improve the performance of their Android and iOS app in less time. Hence, they decided to switch over to React Native.

They utilized the skills and expertise of their developers to build their app using React Native. Moreover, 95% of the app’s codebase was shared between Android and iOS platforms.

These were some popular React Native apps that provide a native app-like performance and top-notch experience to users across Android and iOS.

React Native has opened a pool of opportunities for businesses to launch apps for cross-platform devices without hindrance.

If you also want to launch an app on multiple platforms at a cost-effective price, choose React Native.

Hunting for the Perfect Speaker: Tips to help you Buy Bluetooth Speakers Online